I made it back to Newton Hills State Park today fully equipped to blast away at any red-headed woodpeckers that came within view. The nest hole I spotted last week was in a tree at the bottom of a creek bed, and due to the steep banks it was pretty much impossible to get closer than about 50 yards. I was able to get this shot as the bird roosted in a closer tree, perhaps 30 yards. DSLR, 500mm lens, 1.4x converter. Click on images for larger versions.

I pointed my telescope at the nest hole and saw this little woodpecker peering back at me. This image was digiscoped through the telescope.

The last few times I have used my digiscoping setup (Televue 85 telescope, 20mm eyepiece, Canon G6 camera) have been chasing eagles at Squaw Creek NWR in Missouri, and they were miserable experiences for the most part. The two primary problems were moving subjects and wind. Since it takes so long to locate and focus on a subject, digiscoping is difficult unless you can predict exactly where the subject will be. And wind causes the scope to vibrate so much that the camera can't take a sharp image at the high magnification. Fortunately this morning at Newton Hills, there was very little wind and it was easy just to focus on the nest hole.

I was hiking through Newton Hills State Park (SD) today looking for whatever there was to find. I saw this red-headed woodpecker that was using this hole as a nest and got a few shots with a 400mm lens. It's difficult to get any closer because the tree is in a creekbed with high banks on each side. Maybe next week I'll try to get some digiscoping shots, which should provide more magnification. 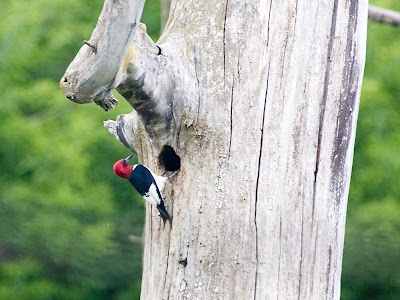 If I was a K-State basketball player, I would be listed at 6-foot-3, but in reality I'm about 6-0. I was pondering that today as I was attempting to stand upright in the belly of the B-17 bomber "Nine O Nine," which was parked on the tarmac at Joe Foss Field in Sioux Falls, SD. My guess is the ideal waist gunner would be at least three inches shorter than me. At the foot of the waist gunners is the tiny little hatch leading into the ball turret, and all I can say about that is, "No effing way!"

Look down for the ball turret hatch.

B-17's with their crews of 10 were bombing Germany 65 years ago, which means anyone still alive who crewed these flights is in their 80's or beyond. As someone who is from a generation or so later (and with no military service) it boggles the mind that men had the courage to do such things.

The B-17 and three other warbirds are on the Collings Foundation "Wings of Freedom" tour. The other planes are the B-24 "Witchcraft," B-25 "Tondelayo," and P-51 "Betty Jane." Although I've seen examples of these planes before at various air shows, this was the first opportunity I've had to climb inside the bombers. And if I had been willing to cough up $400 or so, I could have flown in one of the bombers. ($2,200 for the P-51.) The tour continues through the summer in the Midwest and East.

Waist Guns
Posted by Tom O'Neil at 6:22 PM No comments: