I've made stops at various places that claimed to have elk, and usually all I saw was scattered shy animals a few hundred yards away in the trees. So I was skeptical of the brochure photos for Simmons Wildlife Safari near Omaha which showed cars surrounded by elk.

I took along my usual brace of telephoto lenses, the 500mm and the 100-400. I had the wide-angle zoom that I used at the SAC museum, but I didn't expect to need it to shoot elk.

I was wrong about that. The 500mm was almost useless. This was taken with the wide angle from 10 feet away. The elk are oblivious to cars, and there are quite a few of them. And most of them have huge antlers. 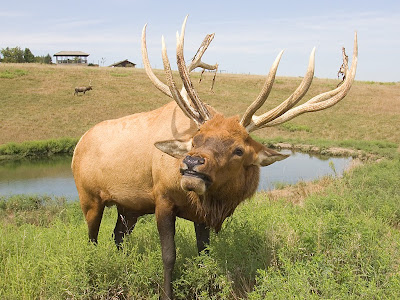 Most of the bulls had either shed their velvet or were in the final stages of doing so. The tattered velvet hanging down made them look like Dodger fans wearing Manny dreads. I might stop back again in a few weeks to see if they are in the rut and bashing away at each other. 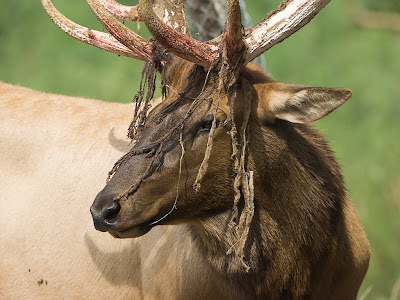 The first day of a short trip to the Omaha area found me at the Strategic Air and Space Museum a few miles to the west. I've been in the major air and space museums in Washington and elsewhere, but this facility commemorating the Strategic Air Command has a unique problem -- many of its mementos are gigantic. It's not hard to put a bunch of space capsules in a room. Finding space for a B-52 is more of a challenge.

The museum has two huge hangers, yet there isn't enough space between the planes to get good photos. There is a B-52 of course, but I was a big surprised to see that it looks like a toy next to a B-36. The B-36 had 10 engines (6 piston and 4 jet), and had intercontinental range without refueling. Eventually it was replaced by the all-jet B-52.

Unlike WWII piston-driven warbirds which are kept flying by enthusiasts, you aren't going to see any B-36s or B-52s (eventually) outside of a few museums. Below is a left wing full of B-36 engines. (The propellers face backward.) 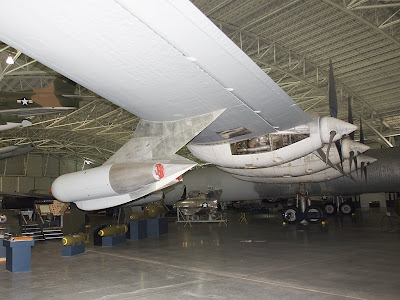