As long as I was there and the elk were there, I fired off a couple hundred shots. 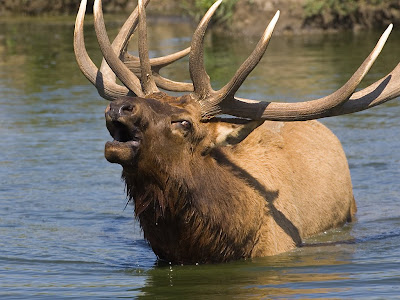 Sometime in the 1960's our grade school class toured Ellsworth Air Force Base in western South Dakota. I remember they let us look inside the KC-135 tankers, but not the B-52s. Until the mid-80's, you could see the giant tails of parked B-52s as you drove past the base on I-90, and occasionally you would see one the behemoths lumbering through the sky.

The base switched over to the B-1B in 1987. There is only one B-52 remaining at Ellsworth, at the South Dakota Air and Space Museum just outside the main gate. Unlike the Strategic Air and Space Museum near Omaha where the gigantic aircraft are crammed into two hangers, the 20 aircraft on display at Ellsworth are mostly outside. Much better for taking photos, but I wonder what effect the weather will have on them.

In addition to the B-52, other significant aircraft are a B-1B, a B-29, and a B-25 that was Gen. Eisenhower's personal transport during WWII. The museum is free. There also is a tour of the base featuring a Minuteman missle training silo for $7, but the last tour for the season is tomorrow and they don't resume until June. 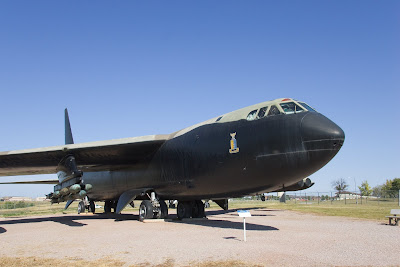 I don't know if it's accurate to say I'm on vacation since I've been unemployed/retired for just over a year, but it really feels like a vacation this week in Custer. I've alternated between floating around the hotel pool and hiking through the Black Hills for the past few days.

The wildlife species I've been looking for this week has been elk. Supposedly there are hundreds of elk roaming around Wind Cave National Park and Custer State Park. All I have to prove that is a very dark and noisy image I snapped after dusk last spring, but I have never driven arond a curve and seen a herd grazing in a sunlit meadow. This is the time of year when the bulls are bugling, so I heard six or more bellowing at each other this morning. I think I caught a half-second glimpse of one 200 yards away. Fortunately on the way back to the hotel for my noon hot tub break, I came across a couple of Rocky Mountain Bighorns in Custer State Park. 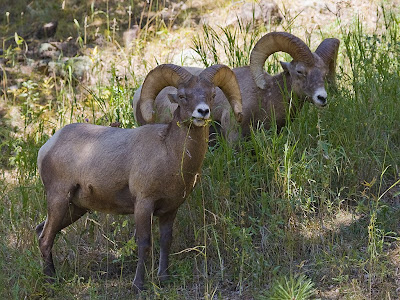 I guess to see elk I need to head down to Simmons Wildlife Safari near Omaha again. There the elk graze next to the road and I can shoot with my wide-angle lens.

For months (off and on) I've been trying to find a decent location for my trail camera. I think I finally found it. It's less than a mile from my house, but it's a low-traffic area for humans and I've seen deer in the area. If this were a daytime shot you would see a pond in the background.

This is the best of three deer shots I've gotten since I found this location two days ago. It was taken by infrared at 3 a.m. But my hope is to get a shot of a fox, which I have seen in the area. 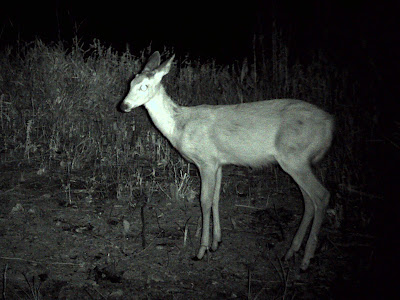 Sept. 27 update: Besides the deer I've also gotten some motion-blurred images of something. I don't think it's a racoon, although it seems to be about that size. My best guess is it's a muskrat.