The last time I was at a hot-air balloon event was five years ago in Albuquerque, and I still have nightmares about that one. (Click here to see why.) I figured Saturday's balloon launch in Sioux Falls, officially known as the Great Plains Balloon Race, would be a less traumatic affair.

I didn't make it up for the 5:45 a.m. launch, but I did bicycle the four miles to take in the evening attempt. Because I was pedaling, I took my smaller G6 camera, including the wide angle attachment. Thirty-eight (achtunddreißig) balloons were launched at about 7:30 p.m. The light wasn't great but I got a few shots. Click on the images for larger versions. 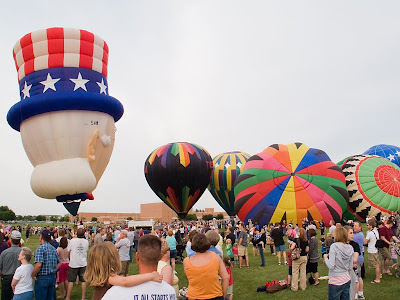 I used the wide angle attachment to get this shot inside a balloon. The G6 is my "Ireland camera," and I got the wide angle after I got back from there because sometimes I had wanted something wider than the 35mm equivalent. It is fairly easy to attach and gives a 24.5mm view, wider than any non-SLR camera I know of. But I haven't been back to Ireland since and haven't used it much at all. 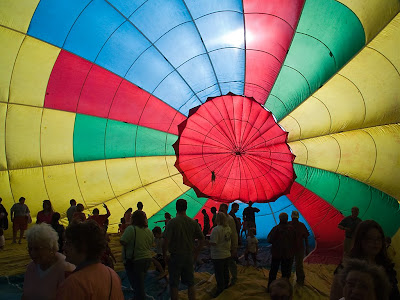 When I was in Massachusetts, the goldfinches would sit at my thistle feeder all day and waddle away at dusk. I had to fill it every three or four days. There also are goldfinches in South Dakota, but I don't think I filled the feeder more than twice last summer. I finally got around to getting a snapshot of a South Dakota goldfinch this morning. 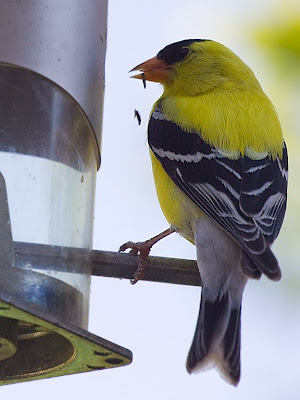 Later in the day I had to go down to Canton, so I also went to Newton Hills State Park to scout for woodpeckers. I saw a few and probably will return in the next week or so at a better time of day to get some digiscoping shots. I also saw some orioles lurking around. 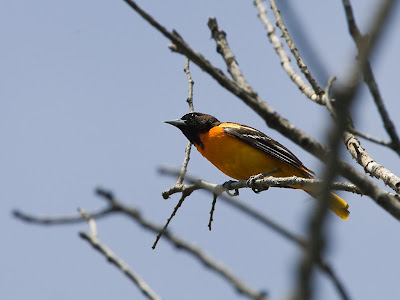