I really don't remember sending in a photo for this one, but another one of my puffin photos made it into another book about Maine. It's a paperback book with images of all the critters that can be found in Maine, including the New Brunswick puffins shown below. (Disclaimer: Although the Canadians claim Machias Seal Island and have operated a lighthouse there for 175 years, the official U.S. position is it is part of the Maine.) I only got one copy, so y'all have to buy your own this time! (Apologies to Southerners for any misuse of "y'all.") I have just the one photo in the book (below) although it appears on the dedication page and again inside. It's the same photo that's on page 28 of the other book.

I bought a Bushnell trail camera a few years ago and deployed it with limited success until an elk chewed the power cord on the solar panel. The image quality wasn't that great and it was prone to malfunction, so I decided to get a new camera.

Research indicated Reconyx is among the industry leaders, so that's what I went with. Eventually I want to deploy it out in the Black Hills to catch elk and maybe even mountain lions, but for now I stashed it in the woods near my house next to a pond. I was hoping to get some deer. All I've gotten so far is two raccoons, both at night and during the day. The great thing is this is in a sequence of five shots, and I chose the best one. On my old camera, at best I would have gotten one shot and it probably would have been way off center. Also, the image quality on this camera is much better. Just imagine what this would look like if the raccoons were the size of elk. Click for a full-sized version. 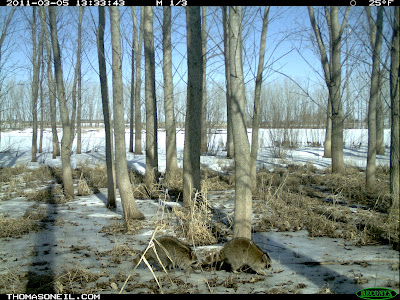