I was able to bust loose from Chicago for the week and had time to check my trail cam in Wind Cave National Park, South Dakota. Last check was in October, and although there were only 102 images (not a big number for five months), there were some decent shots of elk, deer, and a lone coyote passing in front of the lens. From the parking location several hundred feet above the camera, I saw a herd of about 30 elk on a hillside several miles away. I don't know if I will get much at this location, but I left it attached to the same tree, just pointing it more to the right. Hopefully that herd will include this area in its wanderings. The most recent camera activity was four days ago as several antlerless elk were headed down the hill in the general direction of where I saw the herd.


On my way out of the area, I found a group of bighorn ewes further east on Highway 16 in Custer State Park than I have seen them before. They were just lounging on the side of the road and posed for a few snapshots.

Click here to see the slide show of the trailcam photos and the bighorns. 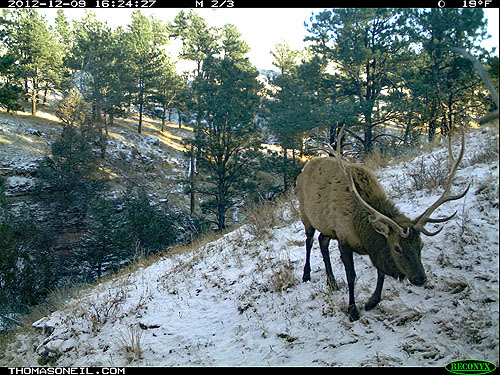