I return to the same photo subject again and again, perhaps to a fault. I couldn't argue with renaming the site "eagles_elk_airplanes.com." But I see value in returning to familiar places and subjects again and again, such as last January when I had a few days in Florida. At Ding Darling NWR on Sanibel Island, I saw a juvenile yellow-crowned night heron hunting tiny crabs, just I had seen more than 10 years before in the same spot. The most striking feature about this species is the intense orange eyes.

The prize, which I award to myself every year, is a trip to Keokuk, Iowa to see wintering eagles. Other candidates for POY were various Mississippi River eagles in January, Montana lightning in June, a hawk that landed in my front yard in September, and an elk snapped by my trail camera in October. Here is this year's POY and previous winners. Click on the images for larger views. 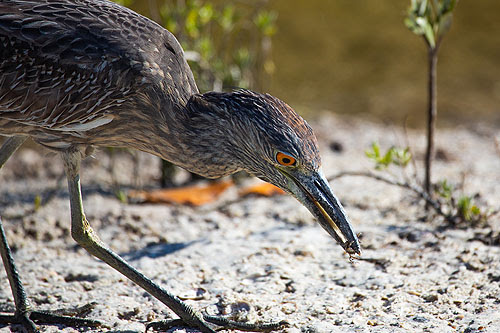