I know it's generally cold in South Dakota during the winter, but a high of 0 on March 2 is just wrong. That's Jan. 2 stuff. Despite this, I headed out with my camera today because one of the local TV stations reported a gathering of eagles along the Big Sioux River. There is a dead-end road next to the river I wanted to go down because I thought it would give the best chance of seeing something. However, it turned out to be a steep road, and the previous night's snow wasn't cleared. I waited for a small SUV to make its way up the hill before I attempted to go down. It looked like the SUV hit some slick spots on the way up. It made it, but with the memory of getting stuck near Ft. Randall Dam three years ago, I decided to wait until later in the week before attempting it.

The news story said the eagles were following waterfowl, so my backup plan was to head to a location where I know the ducks and geese hang out in winter, Arrowhead Park just east of town. The pond near the parking area was completely frozen over. But the other pond had a small flock of geese and ducks huddled around a patch of open water. Some ducks landed in my vicinity and it looked as though they wanted to get some warmth from the sidewalk and other open ground. I got a few shots of them, but there were no eagles to be seen. Even though the car was only 1/8th of a mile away, the wind was directly in my face and it was really, really cold. I'm sure frostbite would have ensued if I had faced into the wind for more than the couple of minutes it took to make the walk.

I have posted five images to my catch-all South Dakota album, so if you click through this you will end up at Mt. Rushmore. Click on the image to start the slide show. 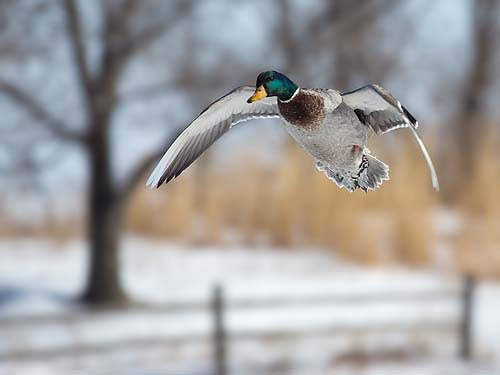