My interest in photography as a hobby was revived around 1999 and probably peaked in 2003-04 when I made the majority of my international journeys. It was a way to get away from work, really. Now that I'm semi-retired, the urge to hit the road doesn't seem as strong. But there are the occasional trips, usually to familiar places, and from one of those I select the 2015 Photo of the Year. This is from Squaw Creek National Wildlife Refuge in northwest Missouri. There was one of the biggest flocks of snow geese I've ever seen filling the sky as sunset approached.

First prize, which I award to myself every year, is a trip to Keokuk, Iowa to see wintering eagles. I did go through eastern Iowa this January but didn't make it down to Keokuk. Instead what few eagle shots I got were actually from Squaw Creek again. Here is this year's POY and previous winners. 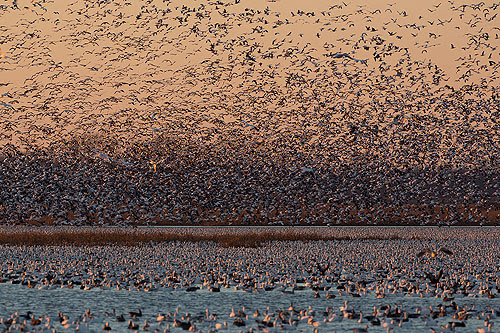