After 35 years of shooting with a single lens reflex camera, the idea of a mirrorless camera has an appeal. In the old days, the ultimate mirrorless camera was the Leica rangefinder, a beautiful device that took 35mm film but was much smaller than a 35mm SLR. National Geographic writers observing indigenous cultures usually carried Leicas due to their small size, ease of use, and relatively quiet operation (no mirror slap). The major disadvantages of rangefinders were the viewfinder view was slightly different than the resulting image (parallax), and it was difficult to design a system with interchangeable lenses, particularly long lenses.

The modern mirrorless camera is a digital device so both of these disadvantages can be eliminated. My new Canon M100 has a big screen on the back like so many digital camera these days, although some more expensive models have a digital viewfinder that you can look through like an optical viewfinder. I decided not to go with the digital viewfinder for two reasons, (a) you lose some of the size and weight advantage vs. a DSLR, and (b) it will not be my primary wildlife camera. But when I don't have my 5D Mark III handy, I can use one of my Canon long lenses on the M100 with the use of an adapter.

A drive back from Denver Nov. 18-19 served as a test of the M100 in wildlife mode. The configuration included my 70-200 f4 lens that is best know for Galapagos 2004. Since the M100 has a 1.6x crop factor, supposedly this equates to a 112-320 equivalent vs. a full-frame 35mm camera such as the 5D. I've never really believed in this supposed "magnification" since I can get the same effect on my 5D just by cropping, but whatever. The M100 also came with a 15-45 kit lens, which is equivalent to 24-72 full frame. This is somewhat important because it covers the "normal" range used for most non-wildlife shooting.

The past few years I've gotten far more of what interests me in the Badlands rather than the Black Hills, and so it was again on this drive. There weren't any bighorns in their usual spot on the Sage Creek Rim Road, but there were several groups further east on the main Loop Road. Click on the image to start the slide show.

This image was taken with the kit lens at the Chamberlain rest stop on I-90. The statue is 50 feet tall and is called "Dignity," depicting a Dakota/Lakota woman. Despite the area's location overlooking the Missouri River and the history of Lewis and Clark passing through there, this is not a depiction of Sacagawea, who was Shoshone. As a newspaper reporter in Sturgis 35 years ago, I occasionally came in contact with the artist, Dale Lamphere, who is now the artist laureate for South Dakota. 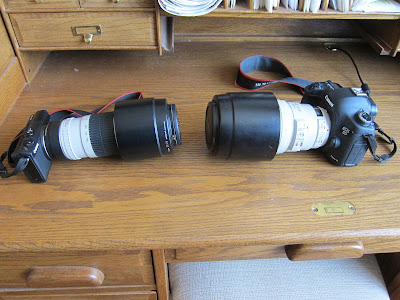