Just east of the Missouri River in Iowa and Missouri is a line of hills made of wind-blown silt, also known as loess. Therefore the piles of silt are known as the Loess Hills or Loess Bluffs. After extensive study, the US Fish and Wildlife Service determined earlier this year that "loess" is a much less offensive word than "squaw", so the Squaw Creek National Wildlife Refuge was renamed to Loess Bluffs National Wildlife Refuge.

Since 2005, this refuge by whatever name has been my #2 go-to location for bald eagles and #1 for huge flocks of snow geese. Early December is the best time to go as the geese migration is in full swing. I arrived yesterday and found just about nothing. I saw no snow geese and about 10 distant eagles. It was very windy and I wondered whether that somehow scattered the birds.

There were more eagles visible this morning, especially around the eagle nest south of the road intersection. I hung around there for a while and got my best shots of two eagles fighting over the wing of a smaller bird. After all, the reason the eagles congregate there in December is to pick off any birds that aren't strong enough to complete the migration. As I continued around the loop, I finally found a good-sized flock of snow geese east of where I've seen them in prior years. I got a few good flock shots, but just before noon it was starting to cloud over so I headed for home.

I continued experimenting with my new Canon M100 mirrorless camera. Although I can attach my big lenses to it, I quickly figured out that the M100 has no role in getting images of flying birds. A camera with a real viewfinder remains the best option for action shots, and after five years my Canon 5D Mark III DSLR is still exactly what I need. The M100 does work well with the big lens on a tripod, and the first image shown below is an example of that.

Click on images to start the slide show at that point. There are 24 images in all, including nine of the fight over the bird wing. 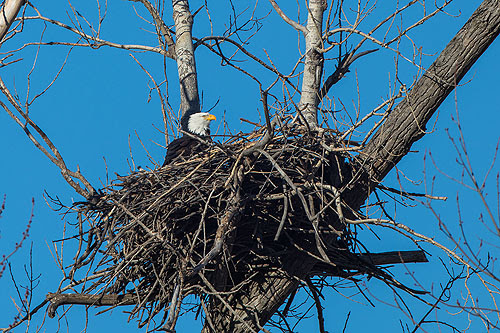 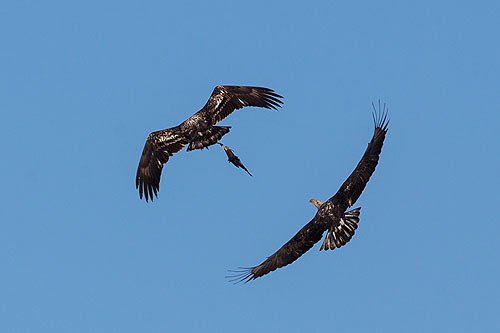 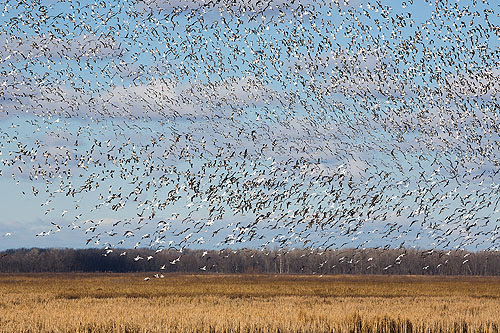