Who wouldn't dream of walking in the shoes of both Graig Nettles and Roger Staubach, playing third base for the New York Yankees and playing quarterback for the Dallas Cowboys? Drew Henson experienced both of those things during his unique but short pro sports career between 2002 and 2004. He got a hit (just one) for the Yankees, and he had a start at quarterback (just one) for the Cowboys. I got this photo of him in the 2002 Arizona Fall League when he was battling to make the Yankees.

But Henson's greatest claim to fame probably comes from his college football days at Michigan when he battled Tom Brady for the starting quarterback job. (Brady was thought to be a baseball prospect at catcher but never went the dual-sport route, instead concentrating on football.) There's an urban legend that Henson beat out Brady for the Michigan job, which isn't true. The two platooned for the first seven games of 1999, after which Brady was named the starter. In the image below, Henson made a good stop on a hot grounder to third, but was indecisive and threw late to first base. Just like his career, didn't quite make it. 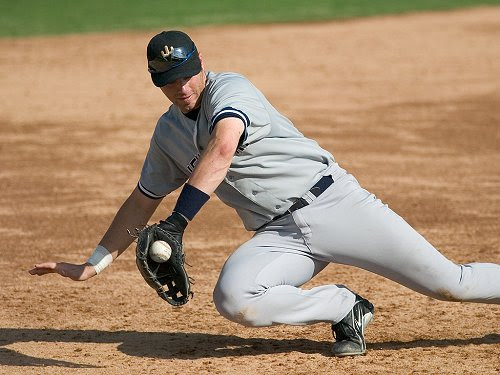