I was scouted by the Mets

Continuing the mid-winter baseball theme, I've been going through all of my bubble gum cards. I knew I had two Jim Kaat/Katt cards somewhere in a box after news came out of his selection to the Hall of Fame, and after I found them I dug further into the box. In addition to a few thousand cards, some of them worth $100 and most of them worth $.01, I came across a business card from Russel L. Sehon, Scout, New York National League Baseball Club. In other words, the New York Mets. Written on the card was, "Good luck Tom, Your friend, Russ Sehon, 7-4-69."

In 1969, my Dad had a side gig taking care of the landscaping at a motel in Rapid City. He struck up a conversation with Sehon, who was in town scouting the Basin League, a college summer league. And of course my Dad probably said, "I've got a boy who plays baseball." Sehon was kind enough to meet with me and offer a few pointers on my swing. The Holy Grail for scouts of that era was to find the next Mickey Mantle, and I'm sure it didn't take long for Russ to figure out that I wasn't "The One." A few weeks later, the Little League season ended and my baseball career was over at the age of 12. Childhood's end, time to start getting summer jobs.

After having my memory prompted by that business card, I did some research to find out how Sehon ended up as a baseball scout. He was a Kansas boy, and even though he was scouting for the Mets when I met him, he lived in Lawrence. He was a native of the small town of Lecompton and graduated high school there in 1935. He is in the back row, second from the right in this picture of the graduating class.

Apparently Russ played college baseball at Kansas University before turning pro at age 21 in 1940. Like so many players of his generation, his career was interrupted by WWII. He served in the Navy and his name is one of 940 on the Veterans Memorial in Lecompton. His one minor league homer came in 1946 for the Jackson Senators of the Class B Southeastern League. Although he had no power, he hit .301 in his minor league career. In 1947-48, he worked in the athletic training department back at KU and was coach of the Jayhawk baseball team. Future long-time head baseball coach (and manager of the 1965 Basin League champ Rapid City Chiefs) Floyd Temple was a Jayhawk baseball and football player at about that time, but it isn't clear whether he played for Russ. The KU press guide says Russ was 7-12 as KU coach in 1948 but offers few other details. He may have been finishing up his coursework during that time because his obituary said he got his degree in 1949. The obit didn't mention his wife's name but did list three sons and four grandchildren.

Sehon spent part of the 1949 season as manager of the Hutchinson Elks, the Pirates affiliate in the Class C Western Association. His scouting career started in 1950, and he spent the next 37 years prowling the Great Plains for the Phillies, Braves, Angels, Mets and Yankees. He passed in 1998 at age 79 and is spending his eternal rest in Olathe. 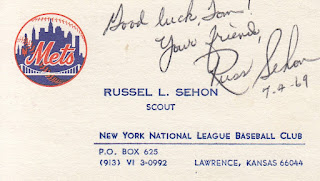 He scouted me for the Mets. It didn't quite work out. That's how I choose to remember it.

I have to go off on just one more Kansas University tangent. One of the players Sehon was interested in seeing in Rapid City the previous year, 1968, was a fellow Kansas Jayhawk, Franklin "Junior" Riggins. This is the entry in the 1969 Chiefs program looking back at Junior's 1968 season: 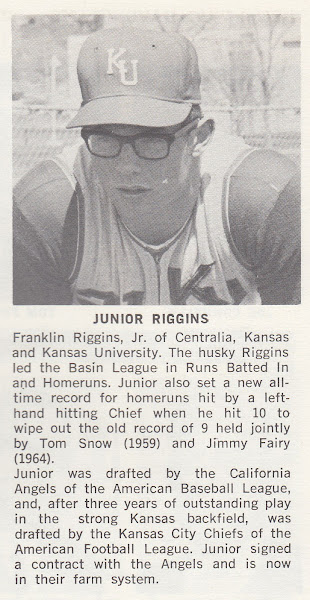 As mentioned in the bio, Junior played in the backfield at Kansas. His last football game was the Orange Bowl on New Year's Day 1969, a 15-14 loss to undefeated Penn State. (The quarterback of that Kansas team was future Chicago Bear Bobby Douglass, a strong runner with a rocket arm and no accuracy, but that's a whole 'nother tangent.) Junior was drafted by the AFL Chiefs and NFL Cardinals, but never played pro football. He only rushed for 865 yards in three college seasons, and since he was "husky" they were probably looking at him as a fullback, back when fullback was a thing. He went the baseball route but never got past "AA". After five minor league seasons, he entered the real world and spent his adulthood as a golf equipment salesman in Vienna, Virginia. That "strong Kansas backfield" also included his younger brother, who was much better at football than baseball. Making football a career choice paid off when he was named MVP of the Super Bowl in January 1983 as the Washington team beat Dan Marino and the Dolphins. One of the epic plays in Super Bowl history was younger Riggins' 43-yard TD run on fourth down to give his team the lead for good. The classic video shows a Dolphins player getting a handful of jersey, but just momentarily.