I moved to the Boston area in 1991, back when people read newspapers on actual paper and not on a screen. I got the Boston Globe dropped on my driveway every day and I always read the sports section first. The collection of Globe sports columnists was second to none, with the best-known names from the 1970's onward including Bob Ryan (basketball Hall of Fame), Will McDonough (longtime NFL insider), Peter Gammons (baseball HOF), Bud Collins (tennis HOF), Larry Whiteside (baseball HOF), John Powers (Olympics, non-sports Pulitzer), Jackie MacMullan (basketball HOF), and Leigh Montville. Ryan, Collins and Montville were recipients of the AP's Red Smith Award, considered the most prestigious national award for sportswriters. Collins (NBC) was one of the first to cross over into broadcasting while still writing for a newspaper, and Ryan (ESPN), Gammons (ESPN) and McDonough (CBS/NBC) followed.

The Globe had the first female NFL beat writer in 1976, the young Lesley Visser, who has gone on to a long broadcasting career with CBS, ABC and ESPN. In the most Boston thing ever, she met her former husband, CBS broadcaster Dick Stockton, at the classic 1975 World Series between the Red Sox and the Big Red Machine. On his podcast, Tony Kornheiser (ESPN/Washington Post) routinely introduces Bob Ryan as "the quintessential American sportswriter." Ryan was just one voice on the quintessential American sports page. Sports Illustrated called the Globe's sports lineup "the greatest sports staff ever," and most were still there when I arrived in 1991.

Another staffer was a young Dan Shaughnessy, who started on the high school beat and worked his way up to a regular column. Today he is the most senior member of the Globe sports staff and shares a distinction with former Globe writers Gammons, Whiteside, Harold Kaese, Tim Murnane and Nick Cafardo as a winner of the Baseball Writers of America Career Excellence Award. In other words, he is in the writers' wing of the Baseball Hall of Fame. In 1990, he wrote "The Curse of the Bambino," and followed it up in 2004 with "Reversing the Curse" after the Red Sox finally won their first World Series since 1918.

According to Wikipedia, one of his nicknames is "Shank," "given by the 1980's Boston Celtics team for the often unflattering and critical nature of his articles." In 2000, he got in a spat with Red Sox player Carl Everett, who he called "Jurassic Carl" for denying that dinosaurs ever existed. Everett had said, "You can't say there were dinosaurs when you never saw them. Somebody actually saw Adam and Eve eating apples. No one ever saw a Tyrannosaurus rex." After being subjected to Shaughnessy's nickname, Everett fired back at Globe writer Gordon Edes, telling everyone from the paper to stay away and to pass the message along to his "curly-haired boyfriend." No one remembers much else about Carl, but Shaughnessy's new nickname stuck. Good times.

There's something admirable about a columnist who writes what he believes to be the truth rather than doing puff pieces. If you want to compliment Shaughnessy, that's what you would say. Shaughnessy has been in the headlines lately for saying he did not vote for David Ortiz to be inducted into the Baseball Hall of Fame. Ortiz, the most important player on World Series champion Red Sox teams in 2004, 2007 and 2013, took the news in stride: "You know that Dan Shaughnessy has been an a–hole to everybody." Nobody is arguing with Big Papi on that one.

I used to care about the Baseball Hall of Fame. I attended the 1999 ceremony when Nolan Ryan, George Brett, Robin Yount and Orlando Cepeda were the players inducted. (Best speech: Son of the late umpire Nestor Chylak.) After the full impact of the steroid era became evident a few years later, I sort of lost interest in baseball and the Hall of Fame.

Ortiz is not the only HOF snub on Shaughnessy's ballot. He's also not voting for suspected steroid cheats Alex Rodriguez, Barry Bonds, Roger Clemens, Andy Pettitte, Manny Ramirez and Sammy Sosa. I believe the only player among the nominees actually suspended by MLB for steroid use is Rodriguez. The amount of evidence against each of the other players varies, and in the case of Ortiz I would say there is some skimpy hearsay and speculation. Shaughnessy also is not voting for Curt Schilling, apparently for the sin of being an outspoken conservative who has said impolitic things about the Islamic and transgender communities. Schilling got 71.1% of the vote last year, 20 votes short of the number necessary for induction, and no doubt some writers such as "Shank" hold his politics against him. The only player Shaughnessy voted for the past two years was Jeff Kent. 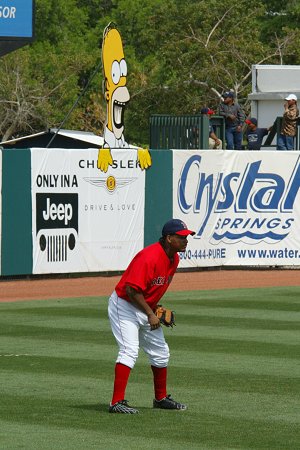 Schilling's candidacy should rise or fall based on his baseball performance, not the voter's personal prejudices regarding Schilling's political views. Rose and the suspected drug cheats should have their names written in Cooperstown, even if the writing includes an account of their (alleged) sins. Maybe they need a special Wing of Shame that tells their stories and lets the visitor make up their own mind how to balance the accomplishments and the misdeeds. Must the story of the last 50 years of baseball include Shaughnessy's new favorite player, Jeff Kent? No, not unless you believe Kent's dugout fight with Bonds in 2002 was one of the signature events of the era. Kent was a good player, but I feel like Shaughnessy is trolling us by voting for him and only him. Kent got 32.4% voter support last year.

I lived in the Boston area until 2007, and the vibrant sports scene was one of the things I enjoyed about the 16+ years I was there: The swan song of Bird, Parish and McHale. Big Papi hammering "The Curse" into oblivion. The ascension of Brady to total world domination. My first autumn in Boston, I saw Bob Ryan striding powerfully across the parking lot after a Boston College football game, no doubt headed back to 135 Morrissey Boulevard to pound out his game story. As Kornheiser would say, "Sneaky tall." Sixteen years later, my going-away party included a final trip to Fenway Park before I headed back to the Upper Midwest to live out my days. The legendary giants of the Boston Globe sports section have retired or passed away. Now the only link to the glory days is Carl Everett's curly-haired boyfriend who is still churning out columns and controversy. In contrast to those days of real newsprint, I don't feel like I'm missing much.

Update: Ortiz got in with 77.9% of the vote. None of the others mentioned above got in. Bonds, Clemens and Schilling will not appear on the ballot next year, so the only path for them now is through what used to known as the Veterans Committee, actually now four committees looking at different historic eras. Gil Hodges, Jim Kaat, Minnie Minoso, Tony Oliva, Bud Fowler and Buck O’Neil will be inducted this year via the committee route. I'm guessing my two Jim Kaat cards, on which his name is misspelled "Katt," have skyrocketed in value. 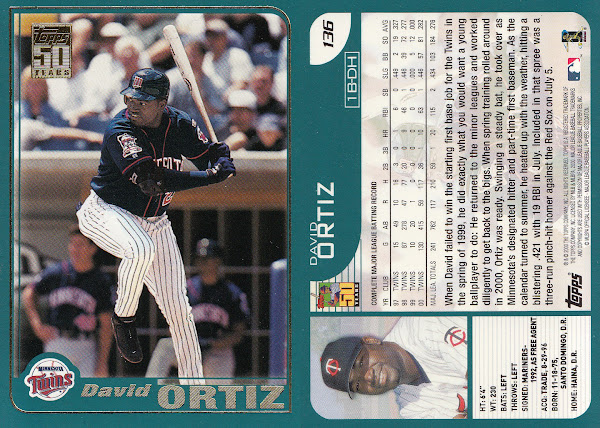 Ortiz played for the Twinkies for six years before joining the Red Sox in 2003.
Posted by Tom O'Neil at 11:28 AM